What is a camera shutter - 10 types and properties

The shutter is a part of the camera that serves to dose light onto photographic material. The shutter speed is set to a parameter such as excerpt... The shutters come in a variety of designs and types, but here's a look at focal length focal-plane shutters.

What is a camera shutter

A photographic shutter is a device for adjusting the shutter speed, that is, the duration of exposure to light on photographic material or the camera sensor. One of the two main tools for controlling exposure. In the filming apparatus, the shutter serves as a photo shutter.

The main task of the shutter is to work in tandem with the diaphragm. In this pair, the shutter is responsible for the shutter speed, which doses the light onto the matrix, or the camera film. The lamellar focal-plane shutters of modern digital SLR cameras have amazing reliability, but at the same time are less maintainable than their older brothers, curtain shutters. In addition to being cheap and maintainable, curtain shutters had another advantage - they emitted less noise and vibration during photography. But this advantage has come to naught over time. More details below.

The focal plane shutter is very close to the surface of the film (focal plane), hence the name. Curtain-slit because usually the shutter consists of two curtains, which, during movement, create a gap between themselves through which the frame is illuminated. There are two common types of focal-plane shutters for small format photographic equipment:

«Horizontal stroke" means that the shutter works on the long side (curtains go along) of the frame. The most common "curtain" horizontal shutters were used in small-format cameras almost everywhere from the first cult "Leica" by Oscar Barnack, and until the beginning of the XNUMXs (the longest was used in cameras of the USSR).

The main drawback of a horizontal travel shutter is its high-speed sync for shooting with electronic flash, for which the limit is often in 1/60 - 1/90 second, as well as the impossibility of stable operation at high speeds (from 1/1000 sec.).

I think this is why most of the curtain shutters that were equipped with Soviet SLR cameras, did not have a speed higher than 1/500 sec. The shutter resource of curtain fabric shutters is, moreover, very small.

To use electronic flash, the shutter is set to what is known as a "sync speed" (denoted as X on the shutter speed dial, or can be assigned a sync speed, such as X / 60), which provides a minimum exposure delay while simultaneously allowing flash to illuminate the frame exactly at the moment when the shutter is fully open. In any other scenario, the frame will be unevenly lit.

In the focal plane vertical stroke curtains run on the short side (across) the frame. These shutters are more complex in design, but their performance is more stable, including at high speeds. Modern shutters in digital SLR cameras are lamellar, vertically operated, electronically controlled. The resource of a lamellar shutter is many times higher than curtain cloth shutters.

Moreover, the speed of operation and the initial impulse are set by the electric motor, and excerpt already controlled by electromagnets. Hence the increased power consumption of the system at long exposures. 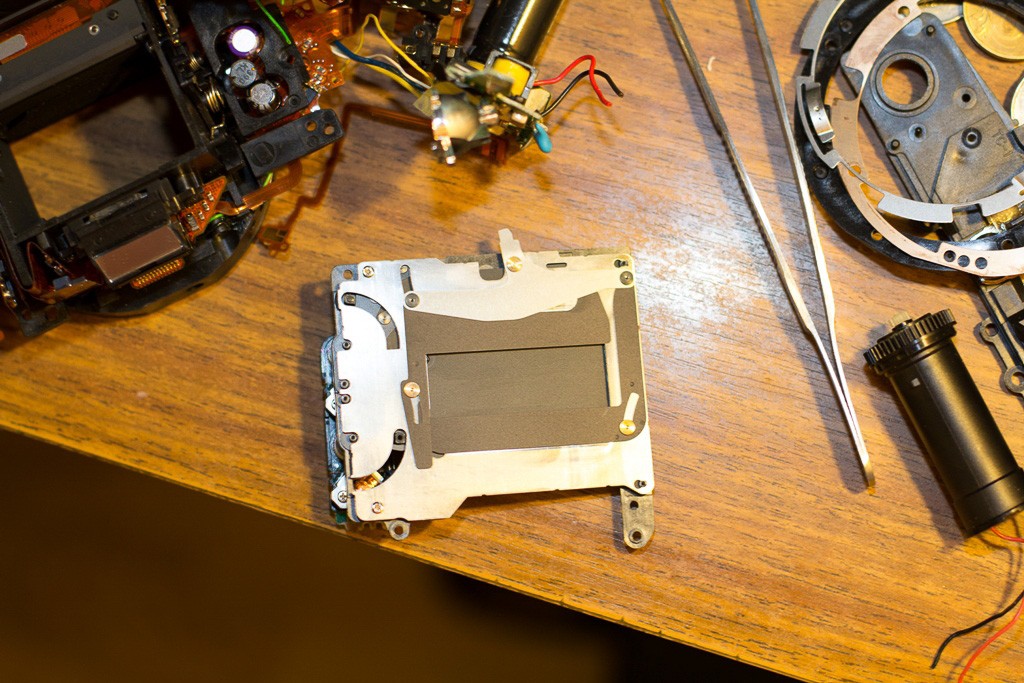 Pictured above is a Canon 40D vertical-travel lamella shutter.

To synchronize the flash at high speeds, a so-called preflash or stroboscopic flash is used. It generates several pulses in one pass of the shutter curtains, thereby solving the problem of synchronization. Usually, even the most inexpensive modern electronic flashes support these modes.

Due to the specifics of the site, we are not yet considering the following closures:

It is used in panoramic cameras of a special design. In this case, a photographic film enveloping a cylindrical drum is exposed to a slit moving past it in the wall of a rotating drum with a lens (Horizon cameras)

The obturator shutter has the same device as a disk single-blade obturator: a metal disk rotating near the focal plane with a sector cut.

The multi-layered sector shutter shutters, like the obturator, rotated around a common axis, which allowed them to be folded into a relatively narrow package or unfolded in the form of a fan. Such a device is more technologically advanced than a lamellar shutter, since it eliminates the difficult-to-manufacture parallelogram lever mechanism for moving shutters (Kyiv-10, Kyiv-15).

One of the drawbacks of most of the early focal plane shutters was the need to cover the lens during its cocking, since at that moment the gap between the shutters did not overlap. The problem was eliminated in the shutter of small-format Leica cameras, the mass production of which was launched in 1925. For the first time, the design of the shutter used in them was proposed for large-format cameras as early as 1893, and was implemented 16 years later in the English Minex SLR cameras. The shutter of the new type consisted of two shutters independent of each other with individual springs.

The gap between them was formed due to the difference in the time of the start of movement, and when the shutter was cocked, the curtains closed, reliably protecting the film from exposure. The successful kinematics of the shutter made it easier to pair it with the film advance mechanism, making the entire design of the camera compact. The curtain shutter of Zenith cameras is an example of this.

It is located between the lenses of the objective in a plane near the aperture diaphragm, which is why it got its name. A feature of such shutters is the simultaneous and uniform exposure of the entire area of ​​the frame, regardless of the accuracy of the mechanism setting (Hasselblad lenses).

A kind of aperture shutter, the shutters of which, when actuated, open the lens opening from the center to its edges and close in the reverse order. These shutters are usually mounted between the objective lenses or directly behind the rear lens.

The central shutter, the maximum degree of opening of the petals of which is adjustable, due to which it simultaneously acts as a diaphragm.

The light is blocked by a set of narrow lamellas, simultaneously rotating around the axes. When the shutter is open, the plates are directed along the optical axis, passing light.

The electronic shutter does not actually use the mechanics of the drive and shutters to cut off light from the matrix. It works in buffer mode and live, as if saving still frames of video that cannot be written to the card. It became widespread with the beginning of the era of smartphones. Most smartphone cameras have an electronic shutter with a multi-frame buffer. The camera activated on the smartphone broadcasts the video to the buffer, from where the last frame or series of frames is then retrieved by pressing the shutter button. The average speed of such a shutter of early models is 1/15 and 1/30 of a second, depending on the frequency with which the ADC could process frames. In filming technology appeared relatively recently. The Sony A7III camera has silent shooting without the use of a mechanical shutter.

A big problem with early electronic shutters is Rolling Shutter, when moving objects blurred across the frame, since information was read from the matrix sequentially, line by line.

The material for the manufacture of curtain shutters in the vast majority was rubberized fabric. Despite their simplicity and low cost, curtain fabric shutters have very unpleasant features that affect the life of the shutter:

If you forget to close the camera lens with the cap, then the lens will act like a magnifying lens, and in the end, the properties of the rubber change to such an extent that it crumbles, "burns out".

Often there are cameras from one manufacturer or another, whose shutter rods are simply torn due to wear.

Over time, the binder component of the adhesive base deteriorates and dries out. The blinds come off at the base of the tensioners.

Inside the tensioners there are steel springs that lose their properties over time. The issue is fixed by tightening the adjusting screws and is not as dire as the ones listed above.

On the print, the listed malfunctions can be displayed as underexposure of one of the areas of the frame, uneven exposure throughout the entire field of the frame (the curtains slow down), the image of the frame is fixed with jerks. Having seen such prints, it is worth paying attention to the state of the shutter.

Despite the fact that curtain closures have dangerous diseases, they are very maintainable, and in order to carry out repairs in the "field" conditions, it is enough to have straight arms and the corresponding literature. The maximum lifespan of a curtain shutter is approximately 5 actuations.

The shutters of such closures consist of several metal lamellas. Moreover, not only steel, but also stainless steel, carbon fiber can be used as a material for lamellas. The lamella shutters of digital SLR cameras are electronically controlled using an electric motor and electromagnets.

The electromagnets are responsible for shutter speed, keeping the shutters open until they receive a pulse from the control chip to open. In practice, it all takes, of course, a split second.

Lamellar shutters became widespread in Japanese cameras, where they began to be used in the early 60s. lamellar gates more reliable than curtain ones, do not fade in the sun 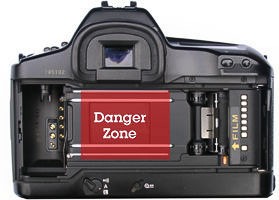 However, the maintainability of such gateThere are much fewer ovs than curtain ones - if replacing the lamellas, in principle, is still in the hands of the user, then its subsequent setting is possible only within the walls of the service center (in general, not a cheap pleasure, even if someone takes up this work). Therefore, lamellar gateWe change entirely.

Of lamellar faults gateyou can find the following:

These faults can mainly be found on shutterx with high mileage, as well as, to some extent, on fresh chambers during the "run-in" period. Running in shutter takes place at about the first thousand operations, after which gate may even go over its lifetime. The resource is marked in green in the table shutter some Canon cameras: 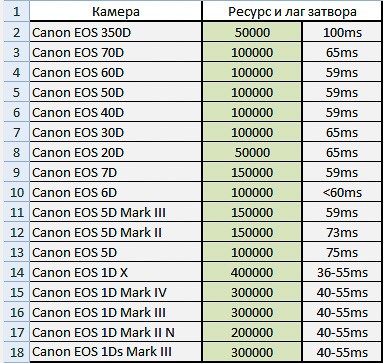 Maximum shutter life varies. The manufacturer, depending on the camera model, sets limits from 50000 triggers on lower-end camera models and up to 500000 on professional ones. It often happens that the camera has time to become morally obsolete, and find the fourth or fifth owner, and the shutter resource has not yet been exhausted.

How the shutter works

How the curtain shutter works

The main structure consists of two opaque shutters that are mounted on the tensioner rollers. As a rule, the curtains are located so that by default they block the access of light to the photographic material.

If the shutter operates with a minimum shutter speed, then the exposure of the photographic material occurs through the gap between the shutters catching up with each other.

Work focal vertical stroke lamella shutter can be clearly seen from this video:

Or shutter lag. This is the delay before the shutter is released. Lag can be defined as the specific delay after the shutter button is pressed, or the waiting time before the next shutter release during high-speed shooting. Basically, the problem of latency after pressing the shutter button is inherent in younger / ancient models of digital SLR cameras, as well as various kinds of point-and-shoot cameras and camera phones. The delay effect is associated with the slow processing speed of the device's processor, or the reaction speed of mechanisms in general (for example, autofocus).

With film Canon EOS Kiss 300, the shooting speed is limited by the speed of rewinding the film, and the shutter lag can be called the waiting time before the end of the film advancing to the next frame during continuous shooting. The table shows the interval between firings in continuous shooting of some Canon cameras (green column): 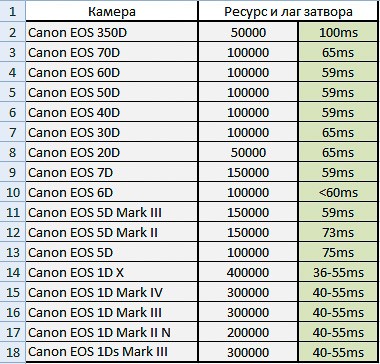